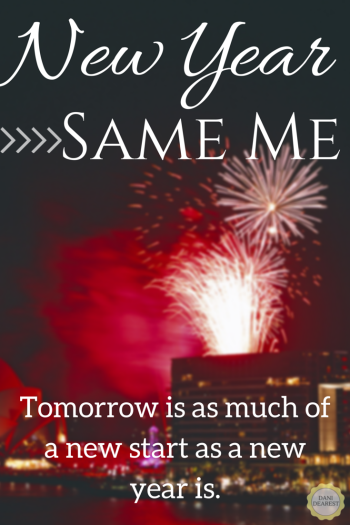 Alas, 6 days into 2015 and we have found ourselves cornered by New Year’s Resolutions.

From the realistic to the absurd, everybody seems to be taking the new year as chance to create an all new them.

Personally, I’ve never made a New Year’s Resolution before, and the idea doesn’t appeal to me all that much. In my eyes, every day is a new chance, why do you need a new year to change something? To go on a diet or be nicer to people or start saving for that big vacation? Do it now.

Tomorrow is as much of a new start as the new year is.

You will have the same responsibilities, the same knowledge, and the same body. Waking up on New Year’s morning does not change that, it is the same as waking up on any morning.

To many people, making a New Year’s Resolution is not a commitment, but a wish. If you make one, know going into it that you have work for it. Commit to it. Make a focus. Make a plan. Follow through.

Instead of making a resolution I like to choose a quote or two to focus on, to inspire me to get through whatever I am dealing with. Maybe these quotes will help inspire you to keep your New Year’s Resolution?

Last year my quotes were:

“There is much more to me than anyone has so far discovered.”

And, the one below which I have put on a mug!

“Plant your own garden and decorate your own soul, instead of waiting for someone to bring you flowers”

I have these quotes printed out and on the wall in my room, and I have alternated them as my phone or computer backgrounds for as long as I can remember.

This year I have chosen two quotes as well:

“If it scares you and excites you at the same time then you should do it.”

And this one, that is already set as my computer background!

“Flowers grow back, even after they are stepped on. So will I.”

Do you have a New Year’s Resolution, or do you have a reason why you don’t have one? Let me know in the comments below! I would love to hear it.